You can see Terry today in his adopted town of Prescott, Arizona, performing in a variety of popular entertainment venues.  His infectious, easygoing, crowd-pleasing manner delights audiences of all ages and tastes.  His stories about his rock and roll days are fun and filled with great memories.

Terry’s story begins in London, England on December 31, 1942.  He made his way to the US and was a junior high school classmate of Warren Entner. Besides their love for music, Terry and Warren shared another intimate bond, they both had the same hairstylist.

Terry and Warren crossed paths again in 1969 when Creed Bratton left The Grass Roots and they were in need of a lead guitarist.  Warren, then a member of THE GRASS ROOTS, contacted Terry and the rest is history.

As lead guitarist for THE GRASS ROOTS, the chart topping band from the 60's and 70's, Terry appeared on the legendary ED SULLIVAN SHOW, the ANDY WILLIAMS SHOW, as well as several appearances on DICK CLARK'S famous AMERICAN BANDSTAND!  Terry received a GOLD RECORD for his outstanding guitar work on THE GRASS ROOTS TOP TEN HIT -- TEMPTATION EYES, and was a key contributor to the success of other hits by the group including, SOONER OR LATER, TWO DIVIDED BY LOVE, and the top selling album, MORE GOLDEN GRASS, which also went gold.

Terry's memorable songwriting style embellishes works by a virtual Who's Who of major recording artists.  His deeply moving MY IMPERSONAL LIFE helped catapult THREE DOG NIGHT'S HARMONY ALBUM to gold status.  Terry's songs have appeared on recordings by TOM JONES, JOHN HAMMOND, LARRY CARLTON, THE MARKETTS, and many others.

In the recording studio and on the stage, Terry has worked and appeared with artists as diverse as MICHAEL McDONALD, DELANEY AND BONNIE, SMOKEY ROBINSON, REDBONE, and many, many others.

BLUE ROSE, Terry's own band, released the album MY IMPERSONAL LIFE, on the Epic Label, and garnered considerable attention and acclaim.  Many today consider it a classic.

Terry's most recent works include the albums, THE EASY LIFE, and LUCKY MAN, and his brand new book "GIFTS", released in late 2011.  Terry has also written a book describing his days in the "Rock and Roll" scene, titled "YOU HAD TO BE THERE, AND I WAS!" which was released in December, 2011.  Go to the "Purchase Music and Book" tab located above.

Terry enjoys passing along his love of music by teaching guitar, song writing. and singing.  Contact Terry now to arrange your Private Lessons. 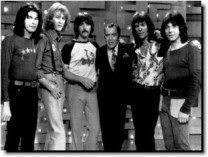